Paul Irish recently said on twitter “Very surprised how many developers actively support IE7 despite it's miniscule usage now. Let's move on!” referencing StatCounter showing IE7 having 0.64% usage. A bit of a conversation followed about corporate users and the question was raised about what the stats actually looks like for them. I have got a few systems that are used internally by large corporates in the UK and here are some data on them to hopefully shed some light.

The two systems I have looked at are used internally by corporate users only – there is no public access and little reason for employees to access this from home. “System A” is used by a maybe 10,000 people in a single large UK organisation with more than 50,000 total employees. “System B” is used by about 25 UK corporates averaging about 3,000 – 5,000 employee each. Do note that the numbers are relative and System B added new customers over the period so there is some data that looks like a reversal of a trend while it probably is just the addition of more customers who use older browsers.

I have included tabulated data at the bottom of the post. 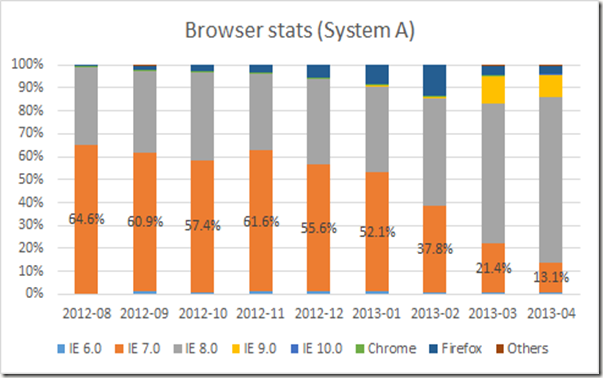 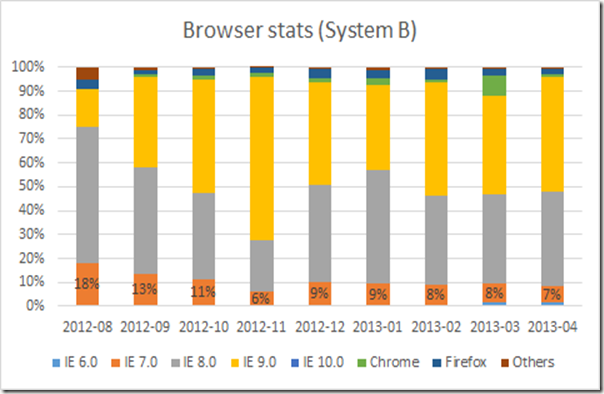 The key finding here is that, although reducing, IE7 is still holding at about 10% and IE8 is 39% and 72% respectively in the two systems even in April 2013. The most surprising finding in many ways is the total dominance of IE. We do see traffic from a wide variety of browsers (including Netscape!) but IE is all-dominant in this limited sample set.

I have included corresponding information about the operating systems being used to see how much of a correlation there is between IE8 usage and Windows XP. 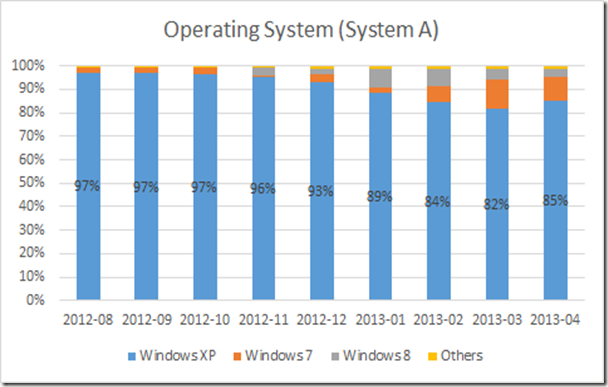 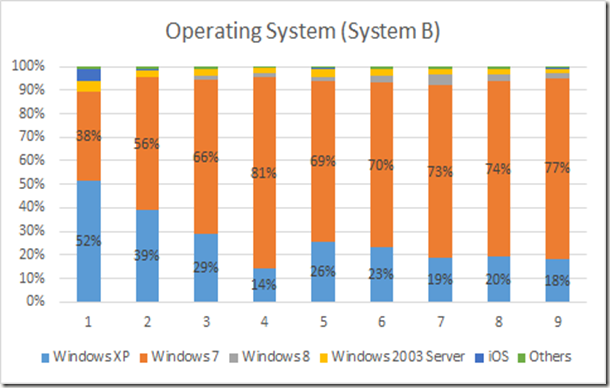 The most surprising finding here is that despite 77% of System B’s users being on Windows 7, 39% are still using IE8. I haven’t done any cross-correlation to link OS directly to browser – but I doubt it would give any more real information.

The data presented here are obviously not representative for all companies, but they do reflect the reality of nearly 30 large UK companies that have no other characteristics in common. Having worked with these companies over the years, it is clear that they do not take browser upgrades lightly; The browser is part of a standard desktop setup.

I have, however, also found that many of these companies have rules that allow the use of, say, Firefox if the employee needs to use a system that just won’t work in IE7. But it is not installed by default on employees’ workstations.

These days I don’t get much push-back when telling people we won’t support IE7 in new systems – they do understand it is just too old. However, my real pain-point is IE8; It still has some horrible oddities and it doesn’t support media queries natively, nor ECMA Script 5. My standard approach when quoting for systems now is that we can build responsive, mobile-friendly apps if we go for “last 2 versions of all major browsers”, meaning IE9 and IE10. You can include limited functionality on IE8 without too much trouble, but if you want mobile-friendly and IE8 support in the same system then the cost of the project goes up very considerably. Ultimately, customers do get the business case; They can certainly have all the super modern stuff and also work perfectly on IE8 and even IE7 – but there is a significant monetary cost. It is not about whether it is technically possible to do these things, it is whether there is a business case for it. We as developers need to remember that these decisions should be business decisions, not technical decisions, and should be evaluated over the the likely life time of the UI you are building.

I have no basis in the data for it, but given that the highest version of IE you could run on Windows XP was IE8, hopefully the forthcoming de-support of Windows XP will push people up to IE9 or IE10.

The data was obtained from IIS logs and the browser and OS was deduced from the user agent string using http://user-agent-string.info/. Entries with “unknown” user agent or operating system was removed from the data set and is not included in “other”.